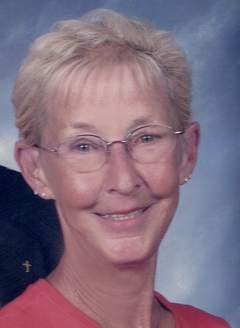 Diana Marie Florea, 72, of Horseshoe Bend, Arkansas, passed away, Saturday, January 24th, at Baxter Regional Medical Center in Mountain Home, Arkansas. She was born in Lundy's Lane, Pennsylvania on October 7, 1942 to the late Mildred (Deter) and William Bellin. Diana served in the U.S. Navy where she met her husband, George Florea and they were married on February 16, 1962 in San Diego, California. She spent her working years as a bookkeeper. Diana was a member of the Horseshoe Bend United Methodist Church. She is survived by her husband George Florea of the home; one son, Joey Florea; three brothers, William, Clint and Robert Bellin; one sister, Andrea Plummer and two grandchildren, Nicholas and Amber Schuler. Memorial service will be held Saturday, February 14, 2015 at 11:00 AM at the Horseshoe Bend United Methodist Church with Rev. Ken Anderson and Rev. Nancy Cameron. Internment will be at Dayton Cemetery in Dayton, Iowa at a later date. Donations may be made to Food Outreach Mission, 1001 First Street, Horseshoe Bend, Arkansas 72512. Arrangements entrusted to Doty Family Funeral and, Memorial Service of Horseshoe Bend, Arkansas.

To order memorial trees or send flowers to the family in memory of Diana Marie Florea, please visit our flower store.