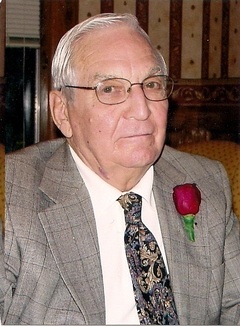 Donald C. Miller of Horseshoe Bend, Arkansas passed away Tuesday, October 28, at his home in Horseshoe Bend, Arkansas. Donald was born May 4, 1921 in Stanwood, Iowa the son of Foster C. and Bessie Hamilton Miller. Donald was united in marriage to Darlene Risdon on December 22, 1942 in Independence, Iowa. Donald completed two years of college before enlisting in the U.S. Army in 1942 where he served forty-three months in Europe with the 12th Armored Division. Don and Darlene celebrated 71 years of marriage and are the parents of two daughters, Lynne Colebaugh of Grimes, Iowa and Amie Ross of Colorado Springs, Colorado. Donald worked for AO Smith Co. He also owned and operated a farm equipment business and a livestock auction market located in Independence, Iowa from 1946 until 1995. He was the employer of 47 people in the community and served on the local school board, city council, chamber of commerce, and numerous church boards. He enjoyed playing golf with his wife and had lived in Horseshoe Bend the past sixteen years. Don was an active member of First Baptist Church in Salem, Arkansas. Don is survived by his wife Darlene of the home, his two daughters, Lynne and Amie, three grandchildren, Matthew Headley, Kristin Clark, and Hallie Durnavich. He was preceded in death by his parents, one brother Kenneth Miller, one sister Doris Swanson, and one granddaughter Abby Durnavich. A memorial service will be held October 31st at 11am in the chapel of Doty Family Funeral and Memorial Service with Bro. John Hodges officiating. Services are entrusted to Doty Family Funeral and Memorial Service 903 Third St. Horseshoe Bend, Arkansas.
To order memorial trees or send flowers to the family in memory of Donald Coppess Miller, please visit our flower store.