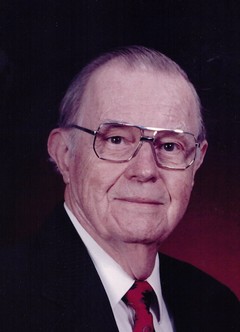 Fred Wallace Sigwalt, 94, of Horseshoe Bend, Arkansas, passed away, Tuesday, May 10th, 2016 at Crown Point Nursing and Rehab in Horseshoe Bend, Arkansas. He was born in Chicago, Illinois on June 6, 1921, a son of the late Frieda E (Steffens) and Wallace F Sigwalt. Fred graduated from high school in 1939. On November 16, 1942 he entered into military service. He served three and a half years in the U.S. Naval Air Service and was honorably discharged. While in the service he took advantage of the GI Bill and studied tool engineering. Fred worked for Simpson Electric in Chicago for 35 years and retired on April 20, 1984. While at a reunion of Simpson employees, Fred learned while he had worked for the company for 35 years, the president had only worked there for 17 years. In 1984 Fred moved to Horseshoe Bend and became active in the Lion's Club, the Fraternal Order of the Eagles, the Masonic Lodge and was head of the Horseshoe Bend Auxiliary Police for 14 years. Fred's first wife, Beverly passed away in November of 1996 and shortly after in August of 1997 Fred met Lula Hardin who was working in the post office. Their first date was on September 9 and they were married on September 30, 1997. He and Lula enjoyed traveling and playing golf together and playing cards with friends. They are members of Agnos Church of Christ. Fred is survived by his loving wife, Lula; brother-in-law, Elva Campbell of Chester, California; brother-in-law, Ron Campbell and wife Claudia of Oak Ridge, Tennessee; numerous nephews and their families and many local friends. He was preceded in death by his parents; a sister and his first wife.

Memorial service will be held, Sunday, May 15, 2016 beginning at 2:00 PM at the Agnos Church of Christ with Bro. Farrell Nicholson officiating.

To order memorial trees or send flowers to the family in memory of Fred Wallace Sigwalt, please visit our flower store.