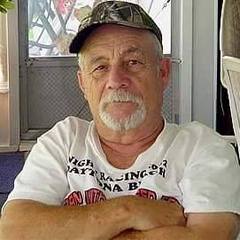 Jerry Glen Bickel, 74, wonderful husband, a proud father and grandfather, entered into eternal peace on March 5, 2015. Jerry was born on June 2, 1940, in Madison, Minnesota to Neola and Everett Bickel. He graduated East High School in 1959. As a young man, he became manager of the Ames Fruit and Groceries Store in Iowa, where he started a family and had four children Cyndi, Tracy, Steve, and Timothy. New adventures took him to Denver to be close to his mother and siblings; he worked on the Denver paving crew as a "Highway Man". This hard working man had many talents, from working at Cookson Door Company in Phoenix to creating his own business. God's path lead him to meet his best friend, he was blessed in finding his beloved wife, Joyce of 33 years. Being a master wood craftsman, him and Joyce founded the companies, one of them being Sheds "R" Us in Arizona. Jerry was gifted with the talent of being a master wood craftsman, creating many wonderful wooden toys that are still treasured to this day. Wanting to be close to family they moved to Horseshoe Bend, Arkansas to be close to Marilyn and Pete, his brother, about 10 years ago where they enjoyed many special times. He and Joyce were baptized and became members of their beloved Salem First Baptist Church. He enjoyed the exciting world of NACAR racing - "Boogity, Boogity, Boogity! Jerry is survived by his beloved wife, Joyce Bickel, his children, Cyndi Keesee (Terry Keesee), Tracy Grove, Stephen Bickel, and step-daughter Tammy Bray; grandkids, Tyler Keesee, Emily Keesee, Benjamin Grove, Matthew Grove, Chelsea Phipps, Bryar Bickel, Kristen Bickel, and Katelyn Bickel; great-grandkids Dawson Phipps and Kaley Phipps; siblings, Jack (Veronica), LaVonne, Darlene, Gail (Ralph), Jay (Linda), Karen (Keith), Marvin (Jan), Marilyn (Warren), Vicki (Gari), Jack (Veronica), Jay (Linda), and Gail (Ralph). He was preceded in death by his parents; son, Timothy; and sisters, Wanda and Dalene and brother Darrell "Pete". Contributions may be made to the family and can be sent to the Salem First Baptist Church, Salem, Arkansas. Local arrangements can be sent to Doty Family Funeral and Memorial Service of Horseshoe Bend, Arkansas. Services will be held Monday, March 9, 2015 beginning at 11:00 AM with a gathering at 10:00 AM at Salem First Baptist Church in Salem, Arkansas.

To order memorial trees or send flowers to the family in memory of Jerry Glen Bickel, please visit our flower store.
Send a Sympathy Card