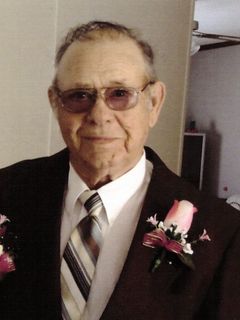 John Henry Jamison, 78, of Mammoth Spring, Arkansas, passed away, Monday, August 3rd, at his home. He was born in Ravenden Springs, Arkansas on May 26, 1937, a son of the late Bulah (Kester) and Frank Jamison. John was united in marriage to Carol Joan Meinert on April 27, 1957 in Rockford, Illinois. He spent his life as a son, brother, husband, father, grandfather and great grandfather. John worked as a forklift driver and he also had a farm. He was of the Jehovah Witness faith and was a volunteer fire fighter for the Saddle Volunteer Fire Department. John is survived by his wife Carol Jamison of over 58 years; three daughters, Carolyn Sue Guss, Barbara Jean Jamison and Deborah Ann Haas; nine grandchildren and thirteen great grandchildren. He was preceded in death by his parents, Frank and Bulah Kester; one son, John Kevin Jamison; two sisters and five brothers. A memorial service will be held on Saturday, August 15, 2015 beginnig at 2:00 PM at Kingdom Hall, 6 Scenic Ct. Ash Flat, Arkansas. Arrangements entrusted to Doty Family Funeral and Memorial Service.

To order memorial trees or send flowers to the family in memory of John Henry Jamison, please visit our flower store.