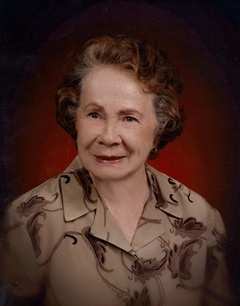 Marjorie Anne Tisthammer passed away peacefully on October 14, 2014 at Fulton County Hospital in Salem Arkansas. Marjorie was born on December 14, 1923 in Chicago, Illinois to Earnest Emmanuel and Mary Claire Linde. She was united in marriage to Merlin "Arne" Tisthammer on June 4, 1946 in Omaha, Nebraska. They became parents to six children. They lived and worked in Nebraska, Utah, Arizona, Illinois and California, then retired and moved to Horseshoe Bend, Arkansas in 1994. Marjorie served in the United States Coast Guard during World War II, and was an executive assistant in civilian life. She was active in her church, St. Mary of the Mount Catholic Church and its Ladies Guild, the North Arkansas Life Care Center Auxiliary and the Horseshoe Bend Public Library. She was proceded in death by her husband, son, Arne John, her older brother and a younger sister. Marjorie is survived by three daughters and two sons, as well as eight grandchildren. Visitation is October 20, 2014 at Doty Family Funeral and Memorial Service in Horseshoe Bend beginning at 1:00 PM and lasting until 4:00 PM. A memorial service will be held on November 1, 2014 at St. Mary of the Mount Catholic Church in Horseshoe Bend beginning at 11:15 AM. Internment will be at St. Mary's Memorial Garden in Horseshoe Bend. Memorials preferred to New Beginnings Pregnancy Center, 23 East Main St, Ash Flat, Arkansas 72513. Arrangements entrusted to Doty Family Funeral and Memorial Service in Horseshoe Bend, Arkansas.

To order memorial trees or send flowers to the family in memory of Marjorie A Tisthammer, please visit our flower store.