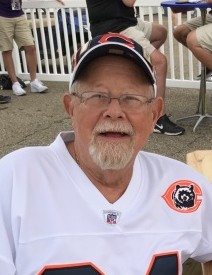 Services are to be announced

He was born in Vandalia, Missouri on August 5, 1939, son of the late Albert and Beulah (Nugent) Wolff. Nate spent his life as a loving son, brother, husband, father, grandfather, uncle, and friend. He was united in marriage to Patricia “Patti” Dwyer on September 15, 1990 in Midlothian, Illinois. During his working years, Nate was a manager for a manufacturing company. He belonged to Good Shepherd Lutheran Church in Palos Park, Illinois. Nate was a member of The Loft and Turkey Mountain Men’s Golf League both of Horseshoe Bend. He served the City of Horseshoe Bend as a past Alderman of Ward 2 and was currently serving as Building Commissioner.

He was preceded in death by his parents, Albert and Beulah Wolff and brother, Jack Wolff.

Memorial service will be held in Chicago, Illinois at a later date.

Celebration of Life will be held in Horseshoe Bend, Arkansas at a later date.

To order memorial trees or send flowers to the family in memory of Nathan "Nate" Joseph Wolff, please visit our flower store.
Send a Sympathy Card

Services are to be announced