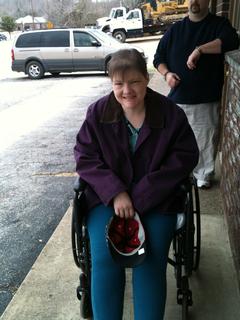 Rebecca Ann Gill, 41, of Horseshoe Bend, Arkansas passed away Wednesday, June 3, 2015, at Care Manor Nursing and Rehabilitation in Mountain Home, Arkansas. Rebecca was born in Norwalk, California on February 4, 1974, a daughter of Dona (Hope) and the late William Nice. She was united in marriage to Paul (PJ) Jason Gill on June 1, 2001 at the Las Angeles Zoo. Rebecca spent her life as a daughter, wife, daughter in law, aunt, friend, and worked as a warehouse manager for Wal-Mart and a caterer for the LA Zoo. She had a strong spirit and faith like that of no other and was an extraordinary woman. During her illness she had many wonderful caregivers at Fulton County Hospital, Baxter Regional Medical Center, Care Manor Nursing and Rehabilitation, and Renal Ventures in Mountain Home, Arkansas When able, Rebecca attended Faith Presbyterian Church in Horseshoe Bend, Arkansas. Rebecca is survived by her husband, PJ Gill of the home; mother, Dona Nice; three brothers, Terry, Doug, and Richard Ice; father and mother in law, Ray and Pat Gill; brother and sister in law, Patrick and Lacy Gill and several nieces and nephews. She was preceded in death by her father, William Nice. A memorial service will be held on Saturday, June 13, 2015 beginning at 2:00 PM at Faith Presbyterian Church, 1001 Third Street, Horseshoe Bend, Arkansas 72512 with Rev. David Schaller officiating. In lieu of flowers please send memorial to the National Kidney Foundation, 1818 N Taylor Street #186, Little Rock, Arkansas 72207. Arrangements entrusted to Doty Family Funeral and Memorial Service of Horseshoe Bend, Arkansas.

To order memorial trees or send flowers to the family in memory of Rebecca Ann Gill, please visit our flower store.