Plant a tree in memory of Bernard
An environmentally-friendly option 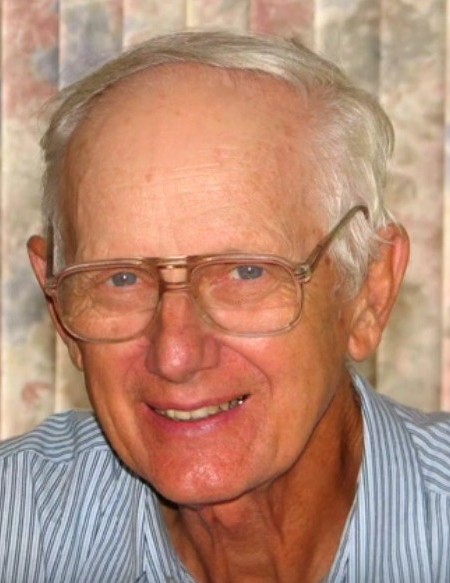 Bernard was born in Keokuk, Iowa, on December 7, 1924, to Elmer Peter Eymann and Louise Helene Haynes.  Bernard was united in marriage to Betty Margaret Jobe on August 8, 1944, in Coeur d'Alene, Idaho. From this union, three children were born.  He and Betty were happily married for almost 76 years.  Bernard spent his life as a loving husband, father, son, brother, grandfather, great-grandfather, great-great grandfather, uncle, cousin, and friend. Tall and skinny with a kind word for everyone he met, Bernie always tried to see the humorous side to any situation, no matter how dark or bleak circumstances might seem.

Bernard spent his working life as an electronics technician, TV repairman, and farmer. In the 1950s, he traveled with Betty and his children around the United States, working for aerospace companies such as Douglas and Lockheed and helped provide technical support for record-breaking aircraft like the X-15.          He and his family were required to move often for his job.  Although they needed to pack up all their belongings and pets into an old car and rickety trailer on a moment's notice, everyone in the family always felt safe and secure because Dad was at the wheel, taking them from one adventure to another, from the desert near Edwards Air Force Base in California to Corpus Christi, Texas, to the Air Force Base near the Potomac River in Maryland.  Through it all, Bernie entertained his wife and kids by joking and whistling and always making each trip a happy experience, no matter how many bumps they encountered on the road.  After he retired as an electronics technician from Motorola in Arizona in 1982, Bernie enjoyed life with his wife on a cattle farm near Evening Shade, Arkansas.  He and Betty spent many years as Gospel singers, sharing their love of Gospel music at a number of churches and events throughout the Ozarks.   In addition to his family and singing, Bernie loved dogs, cats, goats, cattle, listening to music, reading Mark Twain, baling hay, taking care of his farm, and making his wife and daughter laugh.

Bernard is survived by his daughter, Linda Eymann Valentine and her husband, Richard Valentine, and two sons, Bernard E. Eymann and Richard A. Eymann and his wife, Lindsay Eymann, seven grandchildren, thirteen great-grandchildren, one great-great grandchild, and many cherished nieces and nephews. The fourth child in a family of five children, Bernard is also survived by a sister, Charlotte Eymann Hillemeier of Bettendorf, Iowa, his brother-in-law, who was always like a brother to him, Walter Jobe and his wife, Norma Jobe of Keokuk, Iowa.  He was preceded in death by his parents and three siblings:  Elmer F. Eymann, Eloise Eymann Robbins, and Arthur P. Eymann.

Plant a tree in memory of Bernard by clicking here.
To send flowers to Bernard's family, please visit our floral store.

Plant a tree in memory of Bernard
An environmentally-friendly option

Plant a tree in memory of Bernard

4 trees planted in memory of Bernard

Our sincere sympathy to the family of Bernard (Bernie) Eymann. We hope you will find comfort in the memories your family shared.
You are in our prayers
Judy (Eymann) and Chuck Taylor

A Memorial Tree was planted for Bernard Duane Eymann

Plant a tree in memory of Bernard